This painting is currently being reworked.

I began this painting immediately after the completion of Rising Mist. I felt like doing another deep toned picture and I wanted to work on a larger scale. This time I decided to use a warm ground. Some of the reference material is the same for both pictures. As usual I began by trying out different positions for the statues. With this picture I had a more definite composition in mind from the word go. Starting with the sleeping lion I soon found places for the statues that I wished to include.

Now that the statues are well advanced it’s time to work on the background. I made a few visits to Abney Park and photographed various silver birch trees. As with ‘Rising Mist’ I decided to have the foreground flooded and considered adding various birds and animals. 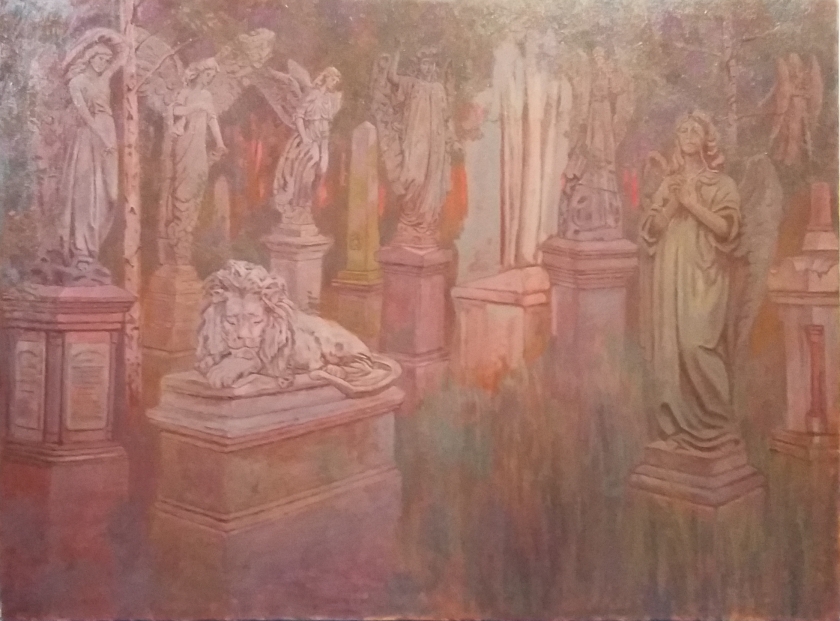 With the centre of the composition reworked the painting is now close to being completed. I’m about to take out one of the coots adding a pair of swans, a male and a female, also a nightingale, an owl and a magpie flying into the centre of the picture.

The final effect shows an imaginary place overgrown, claustrophobic and part flooded. It is a place that has been left to grow wild, trees have seeded themselves and the various statues are going green with moss and lichens. It exists in another realm, in the middle distance beyond the woods the sun is setting leaving the viewer in this mystical environment, contemplating the transience of all phenonena and the mystery of life and death, I hope.

The painting below was completed several years ago and this picture underpins both ‘Rising Mist’ and ‘Fantasia on the Theme of Abney Park Cemetery’. I have two different photographic versions of this picture.

Self employed artist living in Hackney in London. View all posts by Colin's Art Blog